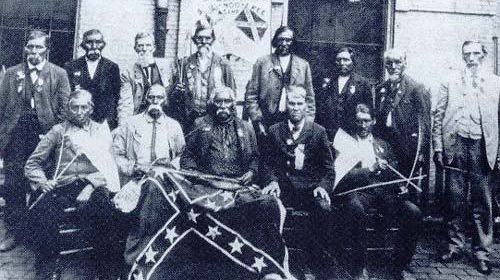 There are two prominent stains on the story of American liberty: slavery and the genocide of the Native Americans. Both cast a long shadow over modern America, and are seen as foundational injustices unto which many of modern American society’s ills can be attributed.

The topics are often seen as part of the same broader struggle against the white European aggressor. That framing of history is fair, but it overlooks a potentially awkward chapter in American history: indigenous ownership of African slaves. Specifically, the unwillingness of certain tribes to relinquish their slaves, even after the Confederacy had been defeated.

Slavery was common within indigenous American cultures prior to European colonisation. Prisoners-of-war taken during inter-tribal conflicts would provide labour for their captors. This system was not however built on racial hierarchy, nor was there an industrialised trade of humans throughout the continent.

Native Americans had themselves been enslaved by European colonialists. An estimated 200,000 people from various indigenous tribes were enslaved in the early colonial period and into the 19th century. As the Transatlantic Slave Trade expanded, Africans became the primary source of labour in the southern United Sates. Ownership of African slaves by the Cherokee, Chickasaw, Choctaw, Creek and Seminole Nations (collectively known as the Five Civilized Tribes) increased as they sought acceptance by bringing themselves more culturally in line with the European settlers. This brand of slavery was distinctly European, and included a perception of racial hierarchy.

This did not stop the removal of the tribes from their traditional homelands. Between 1830 and 1850 all Five Tribes were removed to Indian Territory (present day Oklahoma) along the Trail of Tears. Thousands of indigenous people died during the removals. They brought their slaves with them. In 1860, the Five Tribes collectively owned over 7,000 slaves. The Chocktaw alone owned over 2,300, comprising 14 per cent of their total population.

A law unto themselves

When the tribes were removed from their ancestral homelands into Indian Territory, they became a law unto themselves. They were outside the territorial boundaries of the United States and recognised as independent sovereign nations. They remain sovereign nations to this day. This meant that any proclamations or constitutional amendments made in Washington did not apply to them.

Indigenous tribes had fought in European wars across the continent for centuries, often as part of their own inter-tribal conflicts or for protection. The US Civil War was no different, and tribes aligned themselves with both the Union and the Confederacy. The tribes in the Indian Territory formed alliances with both sides, often for assurances of protection from the Plains Indians. There was another reason for indigenous involvement: the protection of their right to hold slaves.

Ideological splits existed within individual nations. The Chocktaw and Chickasaw fought primarily with the Confederacy. Cherokee tribesmen fought on both sides, sometimes against one another. The Creek were attacked by the Confederacy, and the Seminole were generally on the Union side. All Five Tribes had however signed treaties of some form with the Confederacy.

The Civil War ended in 1865, and slaves were freed throughout the United States after Congress passed the Thirteenth Amendment. As the Five Tribes were self governing entities, the proclamation didn’t directly apply to them, and their slaves remained unliberated.

The Federal Government declared that any tribes that had entered into treaties with the Confederacy had voided any existing treaties they had with the United States. This meant that the treaties that protected the sovereignty and land rights of the Five Tribes ceased to be in effect. In 1866 the tribes signed reconstruction treaties with Washington. The treaties included harsh concessions of land within Indian Territory, paving the way for European encroachment into the American interior.

The treaties also forced the tribes to free their slaves. The Cherokee, Creek and Seminole gave their former slaves – known as freedmen – unqualified rights within their respective nations. The Chocktaw and Chickasaw tribes gave their freedmen the choice of adoption into the nation or removal and settlement by the US government. The Chickasaw quickly reneged on this agreement, denying the Chickasaw Freedmen the right to become citizens. For decades, the Chickasaw Freedmen were citizens of nowhere.

Don Cheadle, an American actor who starred as War Machine in the Marvel Cinematic Universe, is a descendant of the Chickasaw Freedmen. Upon hearing about his ancestry, Cheadle said: “The two biggest blights on the way this country started are slavery and the genocide of the Native Americans. To learn that our family was owned by people that suffered is mind-blowing.”

All Five Tribes eventually rescinded freedmen tribal membership. In 2017, descendants of the Cherokee freedmen successfully sued the Cherokee Nation, with the US District Court ruling they should be granted tribal citizenship rights. The Creek Nation filed a similar lawsuit in 2018, but it has since been dismissed. They continue to fight for validation.