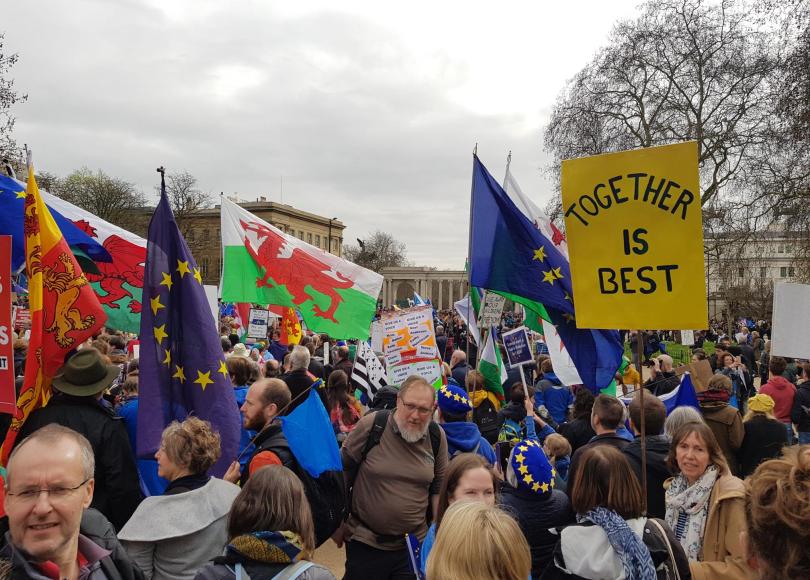 Thousands marched on London today calling for a second Brexit referendum and the revocation of Article 50.

The “Put it To The People” march travelled from Park Lane to Parliament Square, with organisers claiming that more than a million people took part.

A petition calling for the revocation of Article 50 gained four million signatures this week, after the EU agreed to delay the UK’s exit until April.

Protester Jen Llywelyn, 70, from Ceredigion in Wales, said: “I’ve travelled because I suffer from depression, and I’m getting more and more depressed as this madness continues.”

Mrs Llywelyn said that Theresa May had ignored the Welsh people and their interests, and that Brexit could stoke Welsh nationalism.

The march is set to rivals 2003’s Stop the War March, when more than 750,000 protested the UK’s co-operation in the invasion of Iraq, as the largest this century in this country.

Huge crowds gathered on Park Lane for a 1pm start, with many people carrying flags, homemade banners and signs.

Christopher Penney, 67, of Leicester, said he hopes the UK will eventually revoke Article 50, and that political divisions were causing the current stalemate.

Mr Penney said: “I hate to say it but I think we’ve got right on our side, correctness on our side.”

Theresa May has insisted that a second EU referendum is not on the cards.

Frank Connor, who is a member of the Green Party, suggested that the ‘disaster’ of Brexit could allow for eventual parliamentary and electoral reform.

Mr Connor said: “I’m kind of hoping that this week something nuclear will happen.”

The UK is currently scheduled to leave the EU on the 12th of April.