The Australian Holocaust: Extinction of the Aboriginal Tasmanians

There is little in British colonial history that casts as dark a shadow as what some have labelled the Aboriginal Tasmanian genocide. At the time of British settlement in 1803 there were an estimated four to seven thousand Indigenous Tasmanians, by 1847 there were just 147. While some mixed-race communities endured, the last full-blooded Tasmanian, Truganini, died in Hobart in 1876.

Intense debate has raged amongst historians over how the demise of the Tasmanian people should be defined; Niall Ferguson calls it ‘one of the most shocking of all the chapters in the history of the British Empire’, and states that it truly warrants labelling as genocide. Others, such as Henry Reynolds, argue that demographic decline was due to losses sustained in conflict with the colonists, rather than a direct policy of genocide on the part of the government. More controversially, some outright deny the culpability of the colonial government.

Keith Windschuttles’ infamous work The Fabrication of Aboriginal History challenges the general view, and argues that Aboriginal society collapsed due to susceptibility to disease and its cultural mistreatment of women, perhaps overlooking the fact that Tasmanian culture had endured for around ten thousand years in isolation. How could it transpire that a country championing liberty, and the abolition of slavery, could oversee the extinction of an entire population? The Tasmanian population, which had survived ten-thousand years in isolation, would cease to exist after just seventy-three years of colonial settlement. This analysis will seek to explain. 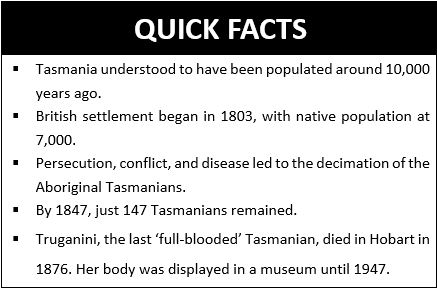 The colonial history of Tasmania, or Van Diemens’ Land as it was originally named by Europeans, was from its beginning synonymous with brutality. Originally a distant outpost administered from Sydney, it became home to Australia’s most hardened convicts. Penal settlements such as Macquarie Harbour were said to have been some of the harshest in the Empire. Struggles with the Aboriginal population started almost immediately after the arrival of the British in 1803. Various initial confrontations with native communities culminated in a skirmish at the Risdon Cove penal settlement in May 1804, when two Aboriginal men were killed after being fired upon by soldiers.

Horrific stories of indigenous butchery at the hands of sealers, escaped convicts and bushrangers prevail from this period. Accounts tell of native men being hunted for sport and used as live targets during firing practices. Bushrangers were said to use indigenous men as a food source for their hounds. There are tales of sealers capturing Aboriginal women and chaining them in captivity as sex-slaves, and an infamous account of a wife being made to wear the decapitated head of her husband in a bag around her neck. Such encounters served to stiffen Aboriginal resistance as they began an early form of guerrilla warfare against the settlers during what became known as the ‘Black Wars.’ 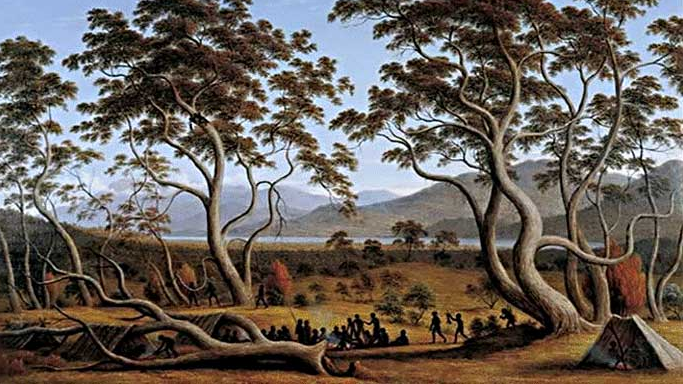 ‘The Last Muster of Tasmanian Aborigines at Risdon’ by British landscape artist John Glover. The painting shows the last indigenous community in the Risdon area, immediately prior to their deportation to Flinders Island. http://nationalunitygovernment.org

Government policy was hindered by the lawlessness of the sparsely settled island. The Lieutenant-Governors feigned interest in defending the indigenous population, but any actions were weak and protests often fell on deaf ears. The settlers, who were trying to carve a life for themselves in an alien land on the edge of the world, had little scope to consider indigenous rights. Attacks on natives often went unpunished.

George Arthur became Van Diemen’s Land Lieutenant-Governor when it achieved independence from Sydney in 1825. He began working with an established Committee for Aboriginal Affairs in an attempt to remedy the quickly worsening situation. In October 1831 the Committee wrote to Arthur listing ‘Atrocities committed by the Natives since the 19th of March 1830.’ The three-page-long list includes an account during which, on the 28th of September 1830, a Mr G. Scott’s house was ‘attacked by a mob of natives, they speared one man and killed another, the body of whom they threw into the river.’ There had, since 1828, been measures in place to displace the natives from their traditional lands in order to facilitate the expansion and success of the British settlement. Arthur came to the conclusion that resettlement on one of Tasmania’s outlying islands was the best option, and felt justified in doing so. The Committee wrote that:

‘what to some may appear the removal of these unfortunate beings from their native land cannot appear harsh; as men, as Christians they can have but one feeling, that of compassion towards their benighted fellow-creatures; and it is the persuasion that such measures alone will have the effect of preventing the calamities which His Majesty’s subjects have for so long a period suffered, and of preventing the entire destruction of the Aborigines themselves.’

This account clearly demonstrates that, forty-five years before Truganini’s death, the British were conscious of the fact that the Tasmanian natives were at risk of extinction, and were desperately trying to prevent what Secretary of State for the colonies George Murray felt would be an ‘indelible stain upon the character of the British Government.’

Arthur quickly devised a plan for Tasmanian resettlement. He wrote to Viscount Goderich in 1831 that ‘to conciliate that wretched people, a small establishment has been formed on Gun Carriage Island.’ This was never seen as a permanent resolution, and Great Island (soon to become Flinders Island) was chosen by the Committee as a suitable location. Arthur considered that ‘escape is quite impossible, as is kidnapping by sealers…there is plenty of game, it is possible that the natives may also here pine to return to their native land, but it is imagined that the amusement of hunting would occupy their minds.’ So it transpired that the last home of a complete, homogenous Tasmanian community was what Robert Hughes called ‘a benign concentration camp’ on Flinders Island. A ten-thousand-year-old culture was sacrificed to accommodate settlers who had arrived just under thirty years ago.

The remaining Aboriginal communities in Van Diemen’s Land still had to be persuaded, or forced, to ‘come-in’ and resettle. The Black Line military campaign, during which armed men sought out remaining indigenous communities, has been presented by some as an attempt at extermination, comparable to the Nazi Einsatzgruppen. The missionary tasked with it, George Augustus Robinson, has been branded an ‘evangelical pied piper’ by Robert Hughes.

Robinson was successful in ‘bringing-in’ some of the most troublesome groups, in January 1832 Arthur wrote back to London in relief that ‘the most sanguinary of the tribes, under the chiefs “Montpeilliatter” and “Tonger Longter”, who have always acted in unison, have at length been conciliated by the friendly mission under Mr.Robinson.’ By 1833, Arthur could note that ‘the country enjoys tranquillity, and the distant stock-runs are again depastured without danger to the shepherds.’ While official government papers portray this roundup as a reluctant policy carried out with Aboriginal interests in mind, many of the settlers saw it as a license to kill, and violence persisted.

In 1835, the last of the Tasmanians were resettled. On Flinders Island, disease and distress led to rapid population decline, and by 1847 the forty-seven who remained were resettled in Hobart. Truganini, the last full-blooded Aboriginal Tasmanian, died in 1876. In their twilight, Tasmanians became sought-after scientific property, with a wide array of eugenic studies undertaken by scholars in the nineteenth century. The body of the last Tasmanian male William Lanne was exhumed for study, while Truganini was displayed, with disregard to traditional funeral customs, in the Hobart Museum until 1947.

Benjamin Madley calls Tasmania ‘probably the most terrifying place in the British Empire a white person could live’, and the settlers focused unapologetically on the protection of themselves and their livelihoods. British practice and policy failed to protect the settlers, who were compelled to protect themselves, with little regard for the Tasmanian population.

Policy also failed, to a much more severe degree, to protect the Tasmanians, who by the time of George Arthur’s plans for resettlement had been galvanised in resistance to a force they felt was intent on the invasion of their land and the eradication of their people. As the extent of the problem revealed itself, attempts at solution were made in desperation. The solution would fail, and the memory of Tasmania would stain the integrity of the British Empire.

The British reaction to this decimation was fuelled by the misinterpretation of indigenous culture with regards to connection to ancestral lands, as well as a prevalent sense of superiority as determined by the imperial racial hierarchy. Moreover, Britain’s need to gain from the colony – originally in terms of establishing successful penal settlements, and then to cultivate a self-sustaining white-outpost within the expanding British Empire – vastly outweighed the need for contemporary authorities to accommodate the original inhabitants of that land. What is perhaps most telling in the story is the ambivalence shown towards the horrors that Indigenous Tasmanians were enduring. The overriding fact is that as long as the colony thrived, the British regarded Aboriginal plight as a matter of fact, and, overwhelmingly, simply did not care.