Frontline Gibraltar: The Evacuation of the Rock

Gibraltar is a thriving British Overseas Territory, situated at the gateway to the Mediterranean. The local population is a multicultural blend of Maltese, British, Moroccan, Genoese, Jewish and Spanish cultures who can be heard speaking a distinctive Anglo-Spanish dialect known as Llanito. Gibraltarians enjoy some of the lowest unemployment figures in the world, with infrastructure supported by bunkering and a booming online gambling industry. Students study at universities, primarily within the UK, for free, with most living expenses subsidised by the local government.

An extensive government housing programme means very few Gibraltarians are homeless. This acute social awareness within Gibraltarian politics and democracy has not evolved as organically throughout the peninsula’s extensive history as it might be assumed. The importance of individual and community rights within Gibraltarian culture can be traced directly to the Second World War, when the territory was almost entirely depopulated by the British to make way for military fortification. The experiences of the evacuated population, who were ferried between three continents throughout the conflict, form the bedrock of modern Gibraltarian culture and politics. 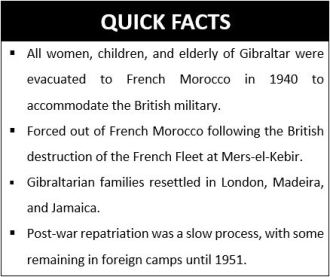 Having been invaded by the Moors in the Fourteenth Century, surrendered to the British in 1704, and besieged by the Spanish and French in 1782, Gibraltar is no stranger to military conflict. In all of these instances the civilian population endured, with the siege of 1782 on record as the longest in British military history. Gibraltarians were relatively unaffected during the First World War, but the all-encompassing nature of the Second World War did not overlook La Roca.

The involvement of Fascist Italy in the conflict meant that the Mediterranean, and control of it, was a key aspect of British strategic policy. This was exacerbated following the Italian invasion of British territory in North Africa. The need for a military staging post in the area led to a declaration by the British in June 1940, that all women, children and elderly of Gibraltar were to be evacuated to French Morocco. The British assessed that the presence of a civilian population would impede the productivity of the base, which was to be expanded for use by the RAF and Royal Navy. Therefore, without significant deliberation, 13,500 Gibraltarians were escorted onto boats away from their homeland.

The situation in Morocco soon became untenable. The capitulation of France, following which French territories in North Africa were governed by the Nazi-collaborating Vichy regime, saw the evacuated Gibraltarians living in enemy territory. This situation turned to hostility following an often documented incident at Mers-el-Kebir, where the British sunk the French Fleet to prevent its use by the Axis powers. The evacuees were forced out of Casablanca as a result, and were herded by rifle-wielding French soldiers onto British ships not equipped with provisions for a large civilian population. Return to Gibraltar was impossible as fortification of the territory was in full swing; the Gibraltar Defence Force were formed, an airfield constructed, and the Rock of Gibraltar itself extensively fortified with miles of tunnels, hospitals, power stations, and barracks built inside. A return of the civilian population would risk the compromising of this extensive strategic development.

As such, despite protests from the fatigued evacuees, the transports navigated the Atlantic war-zone to Britain. Had the transports been attacked, one British Admiral claimed it would have been the worst maritime disaster in history. Most evacuated Gibraltarians remained in London throughout the war, where they would endure the worst of The Blitz within houses rendered empty by occupants who themselves had fled to safer locations in the British countryside.Those who were sent to Madeira were luckier and enjoyed a relatively peaceful war. Many more were sent to Jamaica, where they inhabited a camp now comprising part of the University of the West Indies.

Exposure to the English language and the western world would profoundly impact the evacuees. Pre-war, the Spanish language was used in education, and also within the most popular newspaper of the day ‘El Capense’. Western exposure, as well as participation in Britain’s war, led to the distinct Anglicisation of Gibraltarian culture visible today. 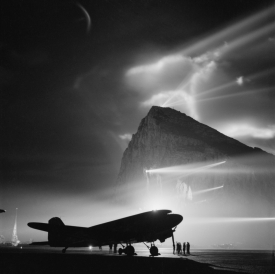 The Rock of Gibraltar, lit by British searchlights during WWII

The success of the 1942 Allied invasion of North Africa, which Gibraltar had been strategically vital in, negated any realistic possibility of invasion or attack at the territory. This prompted calls from evacuees and those who remained in Gibraltar for repatriation. The civilian population was still regarded as a potential nuisance by the British. Gibraltar retained its strategic importance, and Britain saw its dominance of Mediterranean commerce and the associated Suez Canal zone as a lynch-pin in its post-war cling to great power status. Moreover, many homes had been demolished to facilitate militarisation, and an extensive homelessness crisis was feared should the evacuees return too soon. As such, the return was delayed. Many were moved to camps outside of Belfast, within which conditions were said to be appalling. Over 6,000 evacuees remained within camps such as these by the war’s end, with the last Gibraltarian returning home in 1951.

This denial of basic human rights and exodus from their families and homeland led to a heightening of the Gibraltarian social consciousness. Along this vein, the Association for Advancement of Civil Rights was established by Joshua Hassan and Albert Risso. The AACR called for improved working conditions, access to healthcare, and improved working conditions under the slogan ‘with Britain, not under Britain’. It is no coincidence that the rise to prominence of the AACR coincided with the rise of Attlee’s Labour Party in Britain, who were elected on a manifesto broadly comparable to that proposed for Gibraltar. Gibraltarians returning from London had been exposed to the grievances of the British working class and could see these issues reflected within their own society.

Demands for access to free education, healthcare and government continue to form the basis of modern Gibraltarian politics. This focus on Gibraltarian rights forms one of two key components of Gibraltarian culture, alongside the commitment to partnership with Britain. This was perhaps best demonstrated in 2002, when 98% of voters rejected the principle of share sovereignty with Spain. These two key aspects of Gibraltarian culture were undoubtedly shaped by the experiences of those evacuated from their homes during the Second World War.